We invite you to collect the memories of each one while recreating the link between the generations. 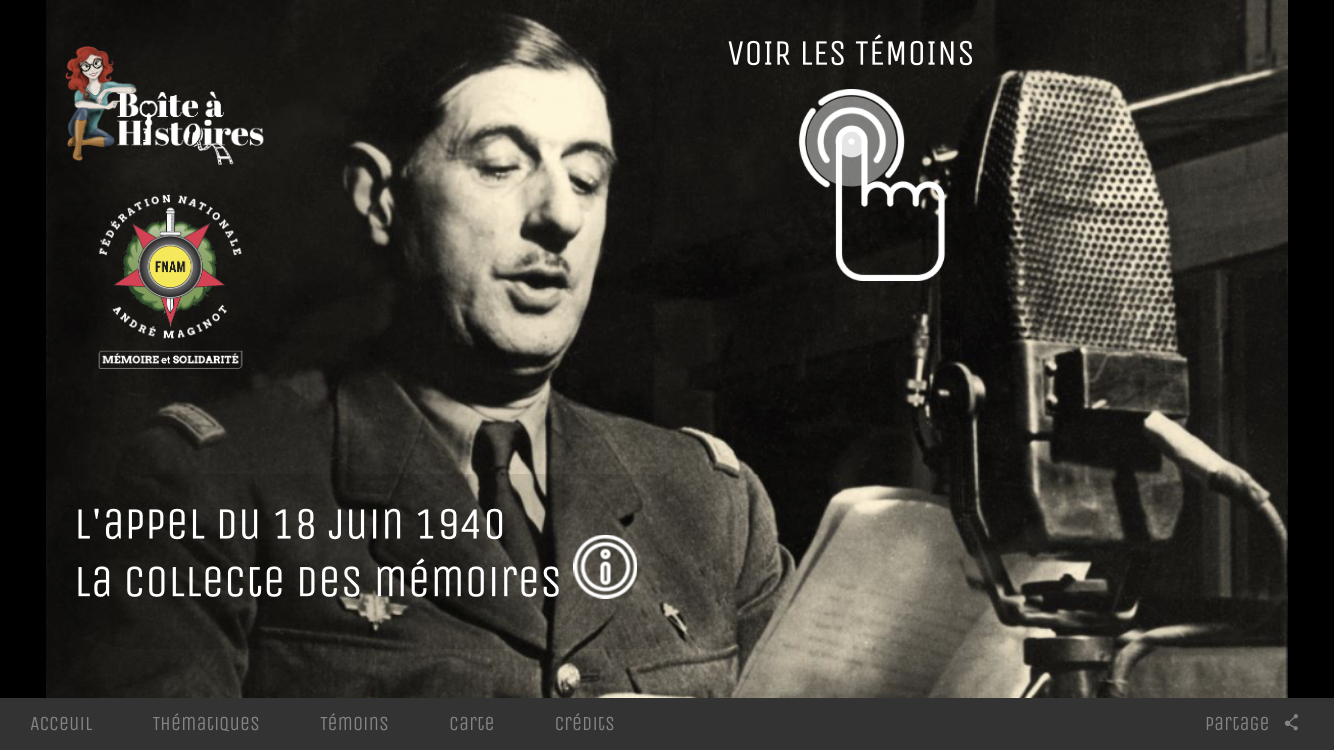 An innovative way to showcase your content by making it interactive. This solution can be used in many events or permanent situations: exhibitions, product launches, press presentations, museums, discovery trails, visual website scenography

Boîte à Histoires comes on site to make a film based on a previously validated scenario. Our specialties : capturing emotion, transmitting know-how, enhancing your intangible capital.

The “Made in Villages – A village, a school, stories

The “Made in Villages” is a project initiated by Boîte à Histoires and supported by the Regional Daily Press, the Ministry of National Education and the Association of Rural Mayors of France.
The villages of France are the memories of our country. Everyone, from the mayor to the youngest school child – participates in order to preserve the collective memory of their municipality.
A great way to create a bond between generations.
Children and residents retrace together the history of their community through videos and other formats. We then collect all this collective memory to preserve it and transmit it to Boîte à Histoires, the digital platform of your municipality.

Syma is a young woman with a rare talent: she is a storyteller. A tireless reporter, she travels France from village to village, meeting children so that they can tell her the 1001stories they have gleaned from their elders – in the streets, in school courtyards, and through tales and legends recounted at home. Syma then records them on her tablet, in her “story box”. Here is one of her adventures .

As I was leaving the Museum of Arts and Traditions in Guillaumes, set in the old Jewish ghetto located in the heart of the medieval village, I heard a small voice call out :
“Syma! Syma! Look ! “
It was Tylian, accompanied by a few children from Guillaumes, who showed me a group of six people chatting in front of the storefront of the J.B. Lions House.
“Who are these people?” I asked.
– He’s a man from America called Lions too! Cailin replied. He came to visit the village with his daughter.
– They are called Lions after the owners of the house and the cellar?
– Yes, I was told they are from the same family, she clarified. “
An American and his daughter in Guillaumes, accompanied by a few city officials who show him the village… Who could it be? It didn’t take much longer for me to decide to investigate!
With the help of Lazarus, Kendra, Cielle, and Jacob, my little helpers joining me after school, we then heard a very surprising story. Let me tell it to you.


It begins more than a century ago. Martin Eugène Lions, born in 1836 in Guillaumes, decides to seek his fortune with his son, along with many other French, in the Universal Company of the Interoceanic Canal of Panama, the company created by Ferdinand de Lesseps to build the famous Panama Canal.

Like almost all European workers who went on this adventure, he did not come back. The construction of the canal was deadly indeed: in addition to landslides, malaria and yellow fever took the lives of thousands. Nearly 6,000 people died on the site between 1881 and 1889 – when the canal company went bankrupt under the scandalous circumstances that we know. The Panama Canal was then completed by an American company.

However, Martin Eugène Lions managed to avoid disease and the thousand dangers that awaited European workers in these inhospitable lands. He managed to find refuge in Colombia, where he remarried and started a new family, forever turning his back on Provence and Panama.

“But then this man, who is he?” Emilie asks me.

– He is the great-grandson of Martin Eugène Lions. His name is Hernando, a Colombian name!

– Is that so? But I was told he was American! asked Océane.

– Yes, it’s true, but his family is from Colombia. It was only more recently that he emigrated to the United States, where he is a professor of pediatric gastroenterology at Wayne State University School of Medicine in Detroit, Michigan. “

Hernando Lions has been interested in history since he was very young, and in the history of his family and of emigrants in particular. Recently, he decided to reconnect with his French roots, and thus contacted the town hall of Guillaumes in order to organize a visit, a kind of family pilgrimage. Once past the first surprise, the reaction of the elected officials of Guillaumes was not long in coming: they organized the best possible reception for this “American cousin,” worthy of the most distinguished guests. Visit of the city, interview, and visit to the cemetery where Hernando was curious about how far back he could trace his family roots. Visibly moved, he then went on to discover the house where his ancestors lived.

‘He must have been happy,’ Theo commented.

– Yes, Cassie replied, he said he was very happy and that the welcome was ‘awesome’!

– No, “ouarme”, he said like that. But it is true that it is not very easy to understand. His daughter, we understand her better!

– “I think he must have said ‘warm,’” I explained. It means “warm” in English! He also said that it reminded him of the way his father and grandfather were. Something sunny and Provençal that must have been passed down through the generations! “

It seems that Hernando Lions has decided to come back next summer with his whole family for a longer stay. “We’ll have to warn her about the bride’s bridge, especially his daughter!” »Louna concluded. It is true that it is a dangerous bridge for young women! But that’s another story …

Today let’s visit the town of Guillaumes together

One project? One question?